Unsung Heroes of the FGC: DoctaMario 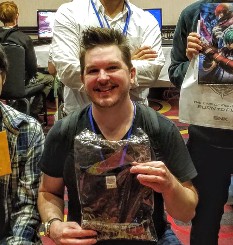 More so than any other video game genre, fighting games are about freedom. You, as a player, are free to choose from a huge variety of characters, each of whom has a different tool set, background, appearance, and attitude. You’re then free to play that character however you like. You can be an inexorable grappler who slowly walks your opponents into the corner and then buries them, but you can also be a maniacal grappler whose audacity freezes your opponents in terror. You can pick up a character who has projectiles and then use those projectiles to keep your opponents out, but you can also use them to oppress your opponents from close up. The options are endless, and it’s a powerful and rewarding feeling to put your own stamp on a character.

Yet there are times when some of us in the Fighting Game Community feel that we don’t have the freedom to choose the most important thing of all: which game to play. It’s not that we’re starved for choice. Wikipedia lists well over 750 fighting games. The difficult thing is picking a game from among that gigantic selection. We all want to find a game whose mechanics, characters, and aesthetics resonate with us. Moreover, we want to find a game with a thriving, welcoming community. With over 750 potential games to investigate, the task is daunting – and because news and publicity in the FGC are dominated by a mere handful of those games, it’s easy to feel as though there are very few viable options.

So imagine that you’re new to the FGC and you’re looking for a game. You watch a few big tournaments and notice that the same flagship titles tend to show up at all of them. You give those games a try – a Tekken or Mortal Kombat here, a Street Fighter or Smash there – but none of them resonates with you. What happens then? Do you stick to being a fan and hope that the next generation of games will appeal to you more? Do you grit your teeth and keep playing? If you’re lucky, you’ll meet someone like DoctaMario, and that someone will introduce you to the game of your dreams.

An Oldie but a Goodie

DoctaMario is a dabbler in many franchises: Mortal Kombat, SoulCalibur, Street Fighter, Guilty Gear, Tekken. In his heart, though, there’s only room for one game: Samurai Shodown V Special. Although the series has a more recent game (simply titled “Samurai Shodown” officially but known as Samurai Shodown VII among the fanbase), DoctaMario prefers the 15-year-old V Special.

He found the game around 2015, after it had all but disappeared from arcades but before it received a major console release. At first, because there was no other way to access the game, DoctaMario played it on MAME (the Multiple Arcade Machine Emulator) on his own. But before long, he found a link to the nascent Samurai Shodown Community Discord server. That’s when his relationship to the game – and to the FGC at large – changed into something truly special.

In addition to being a serious competitor with Amakusa and Yoshitora, DoctaMario has:

If that sounds like a resume, that’s because it is: for all intents and purposes, DoctaMario has made it his job over the past several years to keep Samurai Shodown on the map.

Happily, those efforts haven’t gone to waste. With the help of DoctaMario and other devotees of the franchise, the SamSho community was growing and making its presence felt even before the release of Samurai Shodown VII earlier this year. DoctaMario cites Neo Russell, Foo, Juggy, and more for their efforts. Thanks to them, he says, V Special was included as a side tournament at leading events like Combo Breaker, Toryuken, and the Evolution Championship Series.

In the modern FGC, where there are over 750 titles competing for the same airspace, it’s not easy to get a 15-year-old game into a top-tier event. It’s even harder to get 39 competitors to show up, many of whom would have to travel specifically to compete in that 15-year-old game. Yet the fact is that all of this happened – and that it could not have happened without the one-stop SamSho shop named DoctaMario.

Going forward, DoctaMario’s goals are simple: more. He wants to see “more people showing up” to SamSho tournaments and in the SamSho Discord. He wants an “uptick in social media metrics” for the game and the community. Neither money nor fame are on his mind. He doesn’t need them. He only needs more of what he already has: for him, “the beauty of running an older game” is that “[t]he people who play the game play it because they love it, and [because] playing is its own prize.”

There’s another beauty at work here, too: the beauty of free choice. By supporting not only SamSho VII but also V Special, DoctaMario is doing his part to make sure that everyone in the FGC finds the game for them. No matter how good the current crop of triple-A fighters is, there will always be some of us who find ourselves gravitating towards older, lesser-known, or more offbeat titles. If we arrive at those games to find an empty space, the entire FGC will be worse off for it. If we arrive to find an active, loving community, we’ll have unsung heroes like DoctaMario to thank.

At Michigan M@sters 2020, Eli Horowitz (@BODIEDnovel) will be competing in Capcom vs. SNK 2, a 19-year-old game. (Not that it’s a competition.) Eli lives in Pittsburgh, where he works in software and writes novels. His first novel, Bodied, is set in the FGC.