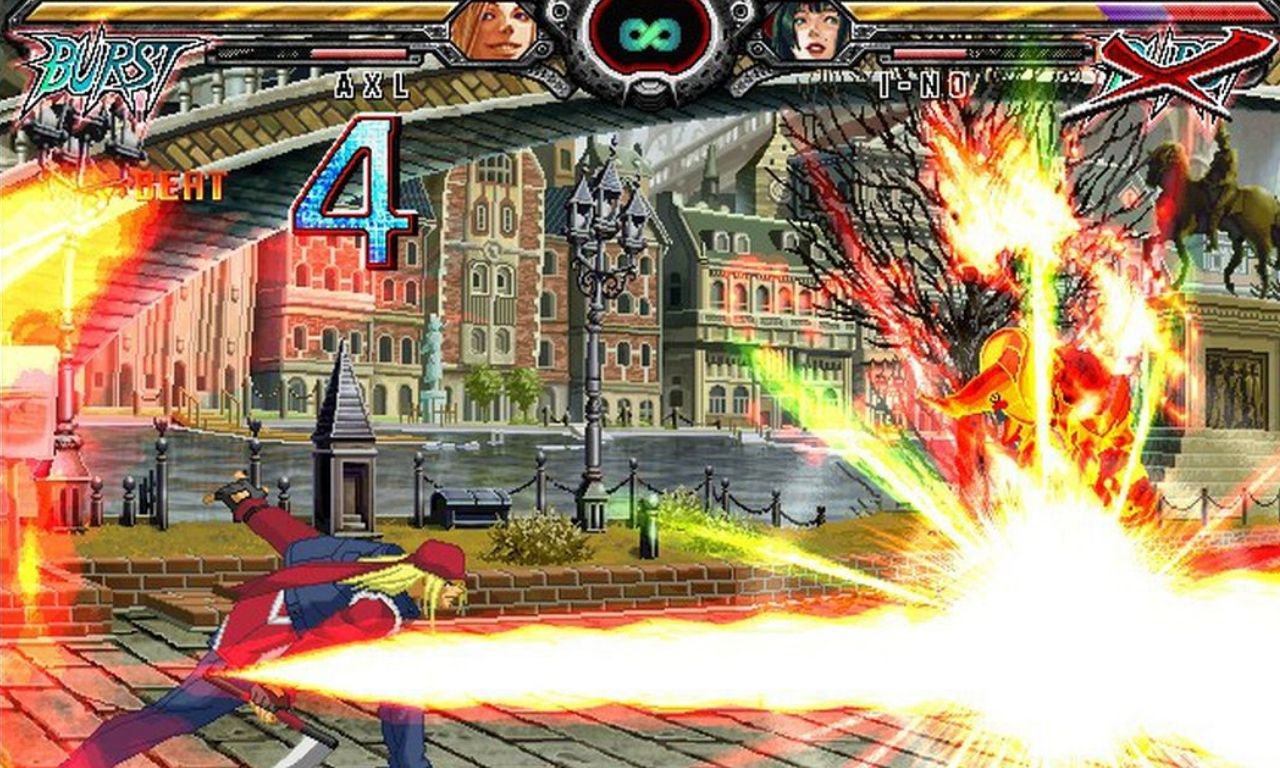 Following the widely praised official implementation of Team French CaliBurst’s GGPO Rollback Update in December, the group have just pushed their latests Beta branch updates to the release version of GGXXAC+R on Steam. This may be the perfect silver lining after -Strive- was delayed. There’s a lot to be excited about, but for a new player to the FGC like me, the “Take Control” replay feature is what most grabbed my attention. Iron Galaxy’s Keits called it a “dream feature”, which I can confirm, having literally dreamt about having something like it to truly learn from my mistakes during the -Strive- Open Beta. Let me explain why.

“Have you ever transcended space and time?”

Learning a fighting game, least of all one noted for its speed and apparent complexity like Guilty Gear, is an uphill struggle. XX dates back to 2002, so the veteran players you face have a wealth of experience. As a newbie picking up the game in January, I took Sajam’s advice that “Training Mode is for finding solutions to known problems.” So rather than indefinitely lock myself in a training lab “until I’m ready” I set out to get bodied online, and find some problems to solve. Thanks to the excellent GGPO netcode and swelling population of players I had a great time, but quickly ran into two big obstacles:

The new features in the latest Beta gave players excellent tools for getting over these hurdles. When watching replays you can now fast-forward, pause, rewind, and study them frame-by-frame, with inputs from both players shown. All that helps you answer the million dollar question “What the hell just happened?” But reading the updates on Discord about the “Take Control” feature was more exciting than patch notes have any right to be. I no longer need to learn the crazy moves some masterful Testament player wrecked me with. I just boot up our replay, pause on some match-losing moment and go all Dr Strange exploring alternatives until I find a good defence or counter. Just like in Training Mode, the “Reset” button winds me back to the moment I took control to try again with something else. Exiting “Take Control” smoothly returns you, paused, to the original moment in the replay.

This feature would be a major blessing in any fighting game but in one like Guilty Gear, with such a big toolkit of universal systems, it has incredible value. I feel people mistake the wealth of tools in Guilty Gear for difficulty, when in reality, no-one can parse it all at once — just bite off as much as you can chew, then digest it and come back for more. A real example might make that clearer.

Replaying one of my earliest matches (this feature fortunately works even on replay files recorded before this update), I lost it by jumping right into my opponent’s combo. “Try blocking?” The chip damage killed me anyway. Same goes for Instant Block. “Faultless Defence?” It stops the chip damage, but pushes us apart when I need to get in their face. “Turn your block into a Dead Angle Attack?” That might let me hurt them, but maybe next time I won’t have half a meter to burn. “Slashback?” This high-risk, high-reward parry-style defence worked really well, allowing me to punish. The two-frame window was really strict but using the Reset button I could go again and again until I got the timing down. It was like save-scumming a rhythm game.

“Oh, so you’re saying Guilty Gear isn’t as difficult as people say, provided you ‘simply’ react with the right tool among many and input correctly within one-thirtieth of a second?” Funny thing is, after all that, the best defence I found was just adding a normal attack to the end of my jump, stopping the combo before it happened. I was so afraid of getting hit I didn’t even consider it. But by studying the moment from all angles I truly understood it and could grasp when to use the different systems first-hand, in context. It made me realize that much of the talk about the “need” for simplifying fighting games overlooks the possibility of first enhancing the learning tools at players’ disposal. It is only when the struggle is still too much, despite giving people good tools that they used well, that we should talk simplification.

“My mind to your mind, my thoughts to your thoughts.”

Another cool use of this feature is that, as replay files can be shared, you can effectively transfer your experiences to other players, and you can practice being in one another’s shoes. The +R Discord has a wealth of top-level tournament matches shared by players, letting you experience what it is like being on the receiving end of expertly applied pressure or experiment with ”tracing” their moves in real scenarios yourself. Both uses of this tool are a real game changer for new players. You can study high level play interactively. You can self-correct your own play. You can answer all those shoulda woulda couldas. You can take what you know now back, to confront what you faced then, and see what a difference it makes.

The View from the Top

Guilty Gear first came on my radar while living in Japan and working with a chap called Mike Boczar. While talking games at karaoke someone mentioned he was really good at it. One evening my now-spouse and I wanted to mash buttons and admire pixels, so I picked up a bunch of games, including, with Mike in mind, GGXXAC+R. I must admit, we didn’t really see what the fuss was about and were too busy admiring the unparalleled beauty of KOFXIII. (I mean, those pants though – can you blame us?)

Older and wiser now, I better understand Guilty Gear, just how good “ElvenShadow” Mike is, and traveling to a future Frosty Faustings is firmly on my bucket list. Being a mere newbie myself, I wondered if I was overreacting to the updates, so I reached out to ElvenShadow for the perspective of a top-tier competitor. Coincidentally, while I wrote him I saw a batch of replays against him being shared. Did he feel this tool meant replays “gave away” too much to other competitors? Or did the “Take Control” feature seem like a mere novelty to him?

Not at all. For him it is “one of the coolest fighting game features that has ever been implemented in any game,” especially because it “allows players to get better more quickly.” As a TO who has competed in Guilty Gear for almost 20 years he is “more than happy to give newer players a chance to catch up.” As for match replays now being “transformed” into practice tools for rivals, that cuts both ways, so he is not in the least bothered that his old matches can be shared and labbed against. “If anything, having everyone else get better and dealing with my mix-ups or pressure […] in the long run, will make me a stronger player because it pushes me to find better solutions […] If there are holes in my game that are not being exploited, I may not realize they are there.”

On the subject of coaching newer players he thinks taking control of replays “will be very useful for reviewing matches” with trainees. 2017 AnimEVO champion Skeletal Minion agrees, feeling the feature is “revolutionary”, not just because it lets players lab real situations without spending time first learning their opponent’s inputs, but “it also helps you brainstorm solutions since you can test ideas on the fly. It’s a game changer of a feature and I hope to see it in more [fighting games], including -Strive-.”

That mention of -Strive- makes me wonder — what are the chances of seeing such features in other new releases? Or indeed, used to enrich older ones, given Arc System Works’ plans for retrofitting rollback netcode into more of their games? We know the new game will have an “Online Training feature” but details about this have yet to be revealed. Sajam mused about whether the -Strive- delay could include adding the feature, but made it clear “this won’t happen, I said this just to get your hopes up”. Keits was also pessimistic about studios being persuaded that the ROI on investing in such a feature was worthwhile. Indeed, while it has been seen before, this was in passion projects (like doujin game Eternal Fighter Zero’s fan-made caster, Revival) and indie games (like Rivals of Aether).

Perhaps partnering with fan developers, as Arc Sys has modelled so successfully with Team French CaliBurst, will be the way forward for reviving games with improved netcode and enriched features. GGXXAC+R is at the time of writing the highest-rated 2D Fighter on Steam* at 97% “Overwhelmingly Positive” reviews and, with the hype surrounding -Strive-, the player population is positively booming — overtaking Street Fighter V and other mainstays at its peak. With results like that, hopefully studios are taking note that investing in good netcode and player-friendly features might just pay off.

If you are curious to try GGXXAC+R’s “Take Control” feature out, the update has now gone live on Steam. Hop on the +R Discord to follow the latest developments — since the Beta’s release on March 2nd there were six updates from Team French CaliBurst, with improvements to stability, match-making, an optional keyboard- and hitbox-friendly “lenient” input settings, as well as further enhancements to Training Mode (for Reversals especially) that I think will really appeal to more advanced players.

What game do you want to see “Take Control” in next? What other features would you like to see Team French CaliBurst develop? Should they celebrate this update by making GGXXAC+R’s name even longer? Let us know your suggestions in the comments.