If you're gonna mash, you gotta know what you're mashing on.
By Robert Smith on September 29, 2020

In part 3 of our Hardware Hour guide, it’s time to break down buttons. We’ve covered the basics of fightstick modding and taken a closer look at joysticks, but moving your fighter is only half the battle. Finding buttons that feel right, fit right, and stand up to punishment are key to any quality fightstick build.

Fightstick buttons are perhaps the most straightforward part in any fightstick, but worn-out or cheap buttons can seriously affect your play at critical moments. Buttons typically come in 30mm and 24mm sizes, but there’s plenty more to know about them. In this guide, we’ll deconstruct a typical button to understand how they work. We’ll also cover different types of buttons, and even discuss the all-button “hitbox” controller.

There are several common parts that make up nearly every fightstick button. Though different types of buttons change the feel of your stick, every button is built to do the same thing in basically the same way. When you press it, stuff happens; pretty simple.

At the core of every button is a switch that signals the fightstick PCB when the button is pressed. This switch can be made in different ways which we’ll cover later. The switch is important not only for buttons to function, but in how they feel when pressed. They’re also the component most likely to break down first, so it pays to invest in buttons with reliable switches.

A plunger sits on top of the switch, making it easy to press. Plungers can be convex (rounded over), concave (sunken in), or flat. There’s no specific advantage to plunger shape, so you can pick whatever is comfortable or fits the style you’re going for.

Convex plungers are most common, since they’re found on Sanwa and other Japanese buttons. Other plunger shapes may be harder to find or attached to cheaper buttons. Some buttons feature clear plungers to allow for art inserts. Keep this in mind if you’re designing a stick that benefits from seamless art. (link example)

A plastic housing holds the switch and plunger in place, and allows the button to sit inside the case. These housings typically feature tabs that snap into a case, but threaded housings that screw in with a nut are also fairly common. As we mentioned in part 1, screw-in housings are handy for thicker cases, while snap-in buttons are typically cheaper and more readily available.

One thing to note with snap-in buttons: the tabs that hold these buttons in place are pretty fragile, and broken tabs are a long-time enemy of stick modders everywhere. A broken tab doesn’t always equal a ruined button, though. Some button holes will still hold a button pretty snugly without the tabs, but this depends on your case.

It pays to be very careful when pressing these tabs–squeeze gently and rotate the button slowly to work the tab through, and you should be fine in most cases. There are also some handy products to help, like Buttercade’s SnapOut tool. These are worthy investments if you can pick them up.

Buttons connect to the PCB with a positive and negative wire attached to terminals on the switch. This is pretty standard, though some switches require extra effort (more on this later.) Most fightsticks use quick-disconnect clamps to connect buttons, avoiding the need to solder wires to the button directly. If you’re already buying buttons, throw a box of these quick-disconnects in your cart. They’re cheap and will save you a ton of time and mess in the long run. 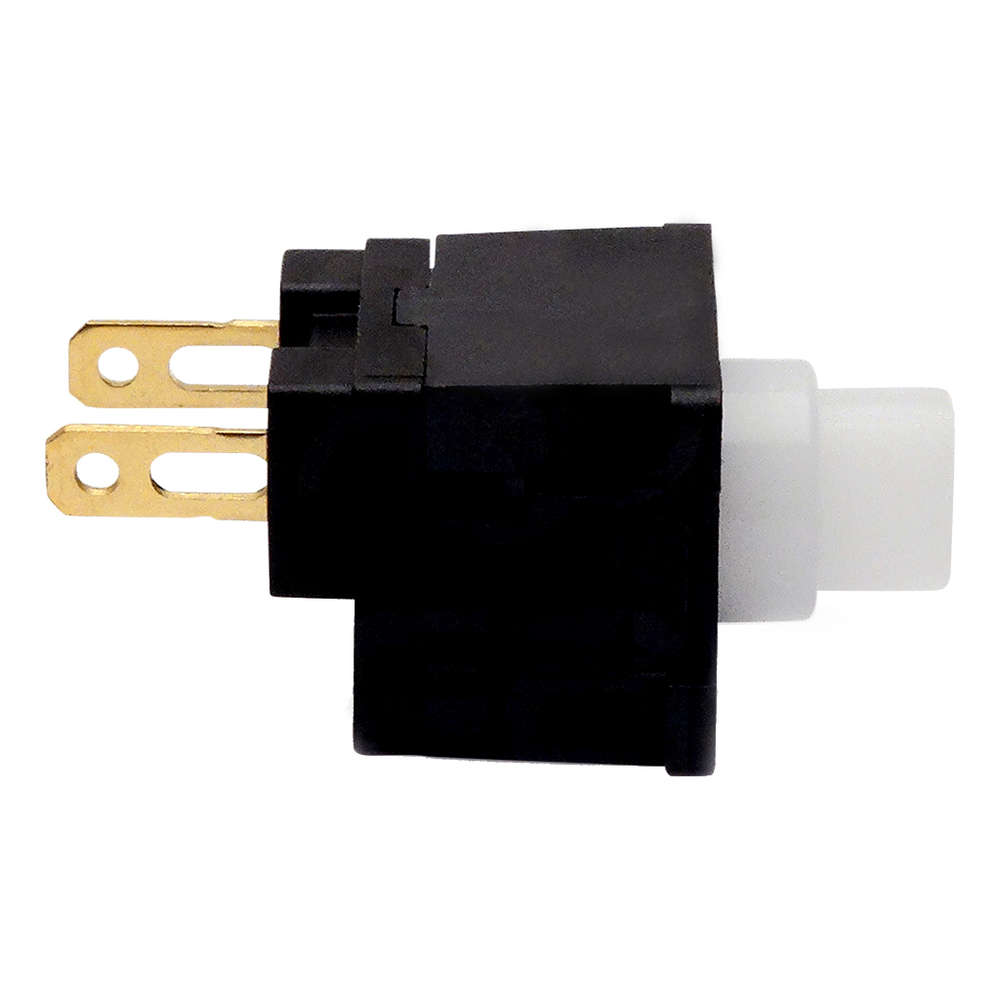 Fightstick buttons take a lot of punishment. Not only that, but the way a button feels can be a big factor in a player’s execution, especially over time. Both of these factors depend heavily on the switch inside an arcade button. On the surface, it’s hard to tell the difference between “standard” arcade buttons and mechanical switches, but it pays to know what to expect from each type.

Standard button switches-typically found in Sanwa, Seimitsu, and other popular brands-are simple, affordable, and sturdy. Sanwa states their switches have an average lifespan of 10 million presses. This is  a pretty good way to gauge how long a standard button will last you.

Points in favor of standard switches are mostly their affordability and availability. Buttons from Sanwa and Seimitsu are the most popular choices: they offer good response and reliability. They’re also fairly cheap, which counts for a lot when you’re buying 10+ buttons at a time. These buttons are the top choice for the majority of arcade machines, for good reason.

Mechanical buttons use the same switches as high-end keyboards, like the Cherry MX line of switches. There are several switch types, each with a unique feel. These switches can be “clicky” or smooth, and some have different actuation depths (the distance the switch travels before it triggers.) They’re also much more durable than standard arcade switches, with a lifespan of 20-50 million presses on average. 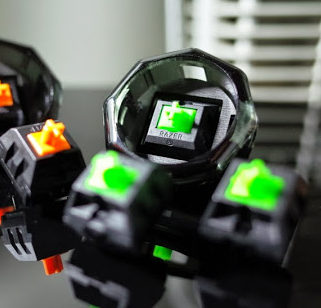 There are a few drawbacks to these switches, especially for beginner or budget builds. Firstly, mechanical buttons tend to be difficult to find. The most popular brand right now, GamerFinger, are often out of stock or backordered, and there aren’t many alternatives available. Second, they can be pricey: twice the price (or more) of standard buttons when you do find them.

Mechanical switches can be swapped out without trashing the whole button, but this can require some soldering. Some buttons come soldered to a small circuit board to keep them connected. Those that don’t use a circuit board don’t connect to wires as reliably, since the posts are smaller than those used in standard arcade switches.

If you don’t mind hunting for them, can spend a bit of extra cash, and feel confident enough to wire them properly, mechanical switches offer the overall best feel and longest life. But if you’re new to modding or trying to keep costs down, you really can’t go wrong with a set of standard arcade buttons from a reliable company.

If we’re talking buttons in the current fighting game world, we’ve got to talk “hitbox.” These all-button controllers are relatively new to the fighters, but nonetheless have garnered some pretty diehard fans among newcomers and veterans alike.

The hitbox–a moniker cemented by the controller’s most prolific purveyors–is essentially a fightstick without the…stick. Four arcade buttons replace the joystick for directional control, positioned intuitively to allow for easy access. That’s the only difference, mechanically speaking, but the configuration opens up some impressive possibilities.

With hitbox controllers, directional buttons are positioned to rest naturally under three fingers and the thumb. Left, down, and right sit above the ring, middle, and pointer fingers respectively, while jump rests lower, under the thumb. If this layout seems backward, think about the directional combos common to most fighters, and how often the jump button is pressed independently. The setup optimizes both of these in a way that joysticks don’t. 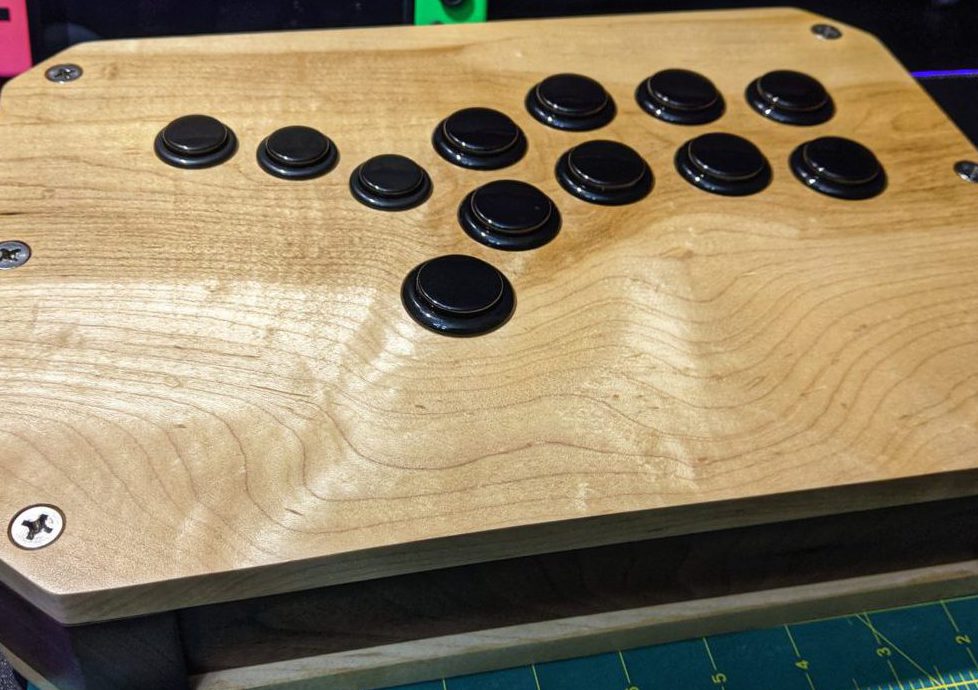 A standard hitbox layout uses 24mm buttons for every action but jump, opting for a 30mm button there instead. There are other layouts, like the “shiokenstar” style that keeps the traditional 30mm action buttons (using 24mm buttons for left/down/right only.) Many hitbox case makers account for several layout options, so there’s no shortage of choices.

In terms of performance, the advantage of hitboxes over traditional sticks is still contested by many. Objectively speaking, button-controlled directions have less distance to travel than with a lever. That, coupled with the intuitive button layout mentioned above, and you begin to see why hitboxes were once scrutinized for their legality in tournaments.

The speed and accuracy offered by hitboxes doesn’t come free, of course. Button-based directions aren’t the easiest thing to master, especially if you’ve spent thousands of hours with traditional joystick controls. Getting a feel for the hitbox takes time, and until its mastered it can severely affect even a pro fighter’s execution. That level of commitment likely contributes to many avid players picking up hitbox, and never going back to traditional controllers.

From a modder’s viewpoint, hitboxes present some exciting opportunities. If you have the parts, any old fightstick can be revived as a hitbox with a few spare parts and a fresh case (or a couple extra holes.) There’s no real difference in wiring the added buttons and wiring a joystick, either. For some older sticks, the only additional necessity (to meet tournament guidelines, mostly) is an “SOCD cleaner” added to the PCB. We’ll discuss these more in a later article.

The decision to add a hitbox to your stick-building resume depends mostly on how committed you are to the all-button…er, lifestyle. Easy to build, it nonetheless demands dedication to master for regular use. That said, if you have the extra parts and a drive to experiment, a hitbox can be a great side project to get some practice and try something new.

With three parts of our Hardware Hour series in the can, we’ve covered nearly every aspect of a typical fightstick build. By now, you should have a solid foundation of knowledge about these controllers, and a deeper understanding of joysticks and buttons; both integral to how any good stick feels in your hands.

Up next, we’ll cover one more aspect of fightstick “guts” in detail: primary control boards and wiring. The heart and soul of any fightstick, these components are often the most complex pieces of any stick. Join us in part 4 to get a closer look, and some tips on how to choose the best parts for your build.